As I sit here on La Rambla, one of the most famous streets in Barcelona, a litre of sangria in front of me and a dog on my lap, a few thoughts come to mind:

First, traveling alone is hard. No one ever told me how hard this was going to be. Not only do I have to carry all my stuff, I have to carry Nala’s as well. Hauling bags up and down the steps of the metro is miserable.

Second, traveling alone with a dog is doubly hard. Seriously, if you thought dragging your significant other along was difficult, imagine you had to feed and water them and pick up all their poop.

Still, I wouldn’t trade it for anything. I love my doggie dearly and she keeps me from getting too lonely out here.

Anyway, the last few days have been…difficult, to say the least. We made our way into Madrid at the crack of dawn on Thursday, stayed two nights, then hopped over here to Barcelona. I’m here for a week before we take the train over to Nice.

I know I’ve plugged Airbnb before, but let me tell you guys, this is the most affordable way to travel. Is it the most glamorous? Not always, but I’m staying in a room in an apartment for eleven bucks a night. Eleven. I even have some awesome flat mates, a gay Argentinian couple with a tiny dog named Fiona and an evil looking Himalayan cat. Their English isn’t the best, but, hey, when in Rome, right? (I mean, when in Rome, attempt to speak dismal Spanish at them. Works out great.)

I spent my first two days here just wandering around. Barcelona is a vibrant, busy, city, with tons to do. Of course, I did no research (I know, unlike me ), so I had no idea what I was doing. However, I did manage to find the beaches, La Rambla, Park Güell, and some awesome local spots. 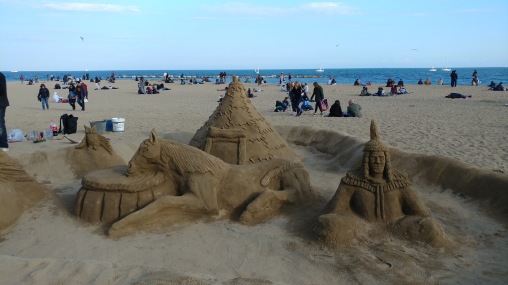 How did I find the local spots? I’m glad you asked! I downloaded an app, called Spotted By Locals, which has over 65 different cities available around Europe. It’s a couple bucks to download each city map, but they’re full of restaurants, sights to see, and things to do that aren’t totally packed with tourists (me).

Now, the other day I went ahead and booked myself a couple of group tours, because I was feeling especially lonely. I mean, there are like 10,000 tapas places here and every single one of them is full of groups of people. I just wanted to fit in, ok guys?

Today I had my first tour, a stroll around Barcelona tasting chocolates and wine. I showed up, bright eyed and bushy tailed, and there was my guide, a nice young woman who informed me that I was the only person to sign up. There went my plan.
It was ok though, because my guide was fantastic. I signed up for the tour via Viator, and she and I walked throughout Barcelona eating all kinds of different chocolates. I tried churros and dipping chocolate, a specialty here in Barcelona, chocolate filled with rum and whiskey, and even spicy chocolate, which I totally did not gag on embarrassingly. The girl ended up being from Ecuador, a Master’s student who had fallen in love in Spain and ended up making her home here. She’s currently attempting to get her Phd.

Now let me just pause here for a second. I just need you guys to know that I studied Spanish for 4 years and never, not once, did someone tell me that they don’t speak Spanish in Barcelona. That’s right. They speak Catalan here, which is its own language evolved from Latin and which I did not remotely prepare for. Whoops!

On the bright side, it’s not too different from Spanish and I can understand it almost as well. Which is to say, dismally.

So what are my plans for the future? Well, I’ve yet to visit a museum out here, and since they’re all free, I figure I should get on that. I also want to take Nala for some more walks on the beach, because she looked so adorably confused when I took her the first time. Seriously, she danced around then spilled all of the sand into my shoes. So endearing.

But for now, I think I’m going to sit here, watch the people pass by, and snuggle my dog. Because what else is life for?

One thought on “A Girl and Her Dog: One is the Loneliest Number”

The Northern Lights shining over a traditional Sami tent in Norway.
A turtle swims in the crystal clear waters of Moorea, French Polynesia.
As seen at the Dubai Mall
The overwater villas in Tahiti are incredible.
The Burj Khalifa towers over the rest of Dubai.
A quiet view of the USAT Liberty wreck off the coast of Bali.